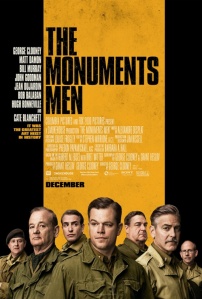 The Monuments Men tells of a group of art historians who were recruited to protect and retrieve millions of pieces of stolen art that the Nazis took during World War II. After so many years, it is great to have these men and their unheralded achievements finally recognized. Without their efforts so many of the fine art masterpieces we know and love would have been destroyed at the hands of the Nazis. Unfortunately, Clooney and Co. turned what should have been a thrilling and adventurous treasure hunt into a sluggish, lackluster dud.

Red flags were originally raised when the film’s studio decided to change the release date from December 18th to February 7th. I naively held out hope that perhaps this wasn’t a sign of the film’s quality, but I should have known better. The Monuments Men never fully decided whether it wanted to be a lighthearted adventure comedy or a serious wartime drama and the film suffered from this. I had such a difficult time understanding the pace of the film. Too many times we found characters standing around doing nothing. Why so much downtime was chosen to be highlighted in what should have been an engrossing story was baffling. The script was also full of campy, mediocre dialogue, turning an A-list cast that includes Clooney, Matt Damon, Cate Blanchett, and Bill Murray into grinning and frowning buffoons.

George Clooney’s directorial career has been a mixed bag. Good Night and Good Luck is by far his most accomplished film, being nominated for 6 Academy awards including Best Picture for 2005. He also received varying levels of critical praise for the political drama The Ides of March and the biopic comedy Confessions of a Dangerous Mind. But his football comedy Leatherheads wound up landing with a thud and it appears The Monuments Men is about to join it.

Examining the true story The Monuments Men was based on, all I can say is what an opportunity wasted. Normally a film as milquetoast dull as this was would be an infuriating experience. But sadly, the best description I can come up with for The Monuments Men is simply disappointing. How a cast and director so talented with such a fascinating untold story can be so yawn inducingly bland is beyond my comprehension.-JL