Mr. Nobody Finally Released on DVD

Posted by amateurcinefile on March 12, 2014 in Cinema Journal 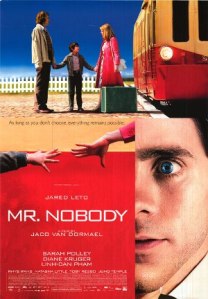 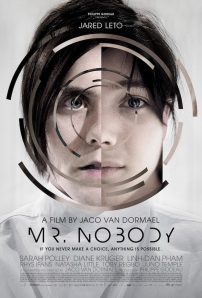 While walking around the DVD section of Walmart this morning, I just happened to stumble across a certain film that has been on my cinema radar for quite some time.  Back in 2009, Jared Leto of Dallas Buyers Club fame, made a small independent psychological science fiction film called Mr. Nobody.  Despite mostly positive reviews from critics at the time and an ever-growing army of adoring fans, Mr. Nobody was all but ignored in the U.S. for years by distributors.  Finally in November of last year, Magnolia Pictures stepped up and agreed to release the film in select U.S. theaters.  Now, with the amazing success of Jared Leto’s recent Oscar winning performance, it appears that Magnolia is rightfully trying to cash in on their investment by releasing Mr. Nobody on DVD.  I have not yet seen this film myself, but with it finally being available on Netflix, I will soon have the opportunity.  All indications are this is a very heady, psychologically dense film that’s probably not be for everyone.  However, I just wanted share my personal excitement to those who might also enjoy more experimental cinema or just looking for something different, if so Mr. Nobody is a film that might also pique your interest.  Happy viewing!-JL