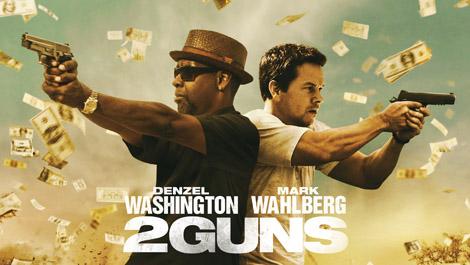 Two undercover agents, each unaware of the others’ covert status, hatch a scheme to infiltrate a Mexican drug lord’s organization. When the plan goes wrong and allegiances dissolve, Bobby (Washington) and Stig (Wahlberg) find the only people they can truly trust is each other. Based on a graphic novel of the same name, 2 Guns is the second teaming of Icelandic director Baltasar Kormakur and star Mark Wahlberg, joining 2012’s minor hit Contraband.

2 Guns falls under the category of the buddy film, an overplayed sub-genre that gets unmercifully rehashed year in and year out. A sure-fire way for one of these films to differentiate itself from an other is through casting, and in this nature 2 Guns wildly succeeds, landing veteran bad-asses Denzel Washington and Mark Wahlberg. Denzel brings to the film his classic swagger and mystique and Wahlberg has perfected a cocky, comedic timing. Together they add an extra level of credibility and humorous amusement to a story that shouldn’t be as entertaining as it wound up being.

As expected with a tale of this nature, 2 Guns is jammed packed with an overabundance of gun play and explosions, as the many plot twists and double crossings obviously require some serious fire power. If examined with a rational brain, 90% of this storyline is absolutely preposterous. But problems with plausibility can simply be explained away by the fact the source material is a graphic novel, and graphic novels aren’t always known for being logical.

2 Guns as a whole wound up being more entertaining than it had any right to be. The obvious reason for this is Washington and Wahlberg, as the two join forces to show that an over-the-top action film doesn’t have to be a completely brainless cinema experience. Despite two questionable supporting performances and the usual pitfalls that come with most shoot-em up action ficks, 2 Guns takes your run of the mill buddy film and infuses it with just enough cool from its leading stars to make it worth watching.-JL