Russell Baze, a steel worker struggling to scrape by in a dying Pennsylvania mill town, loses what little he has after a tragic accident lands him a five year prison sentence. Upon his release, Russell is troubled to discover that younger brother Rodney, an Iraq war veteran with mounting debts, is now involved in illegal underground bare knuckle boxing to make extra cash. When Rodney disappears after a high money bout in the rural backwoods of New Jersey, Russell takes matters into his own hands after local law enforcement appear unhurried and apathetic.

Out of the Furnace is a dark, somber drama that elicits comparisons to past films such as Winter’s Bone and The Deer Hunter. Braddock, PA, the town the film is set in is only 12 miles east of Pittsburgh, but thanks in large part to the doleful and distressed cinematography used, it looks almost like another world. Throughout the film, pain and regret hang over the picture like smoke from the steel mill stacks. The banjo and fiddle filled ominous musical score adds even more to the film’s foreboding atmosphere. Though the storyline has a familiar predictability to it, what keeps Out of the Furnace gripping to the end are the absorbing performances from its cast of A-list actors.

2013 brought us two impressive performances from Welsh actor Christian Bale. While the flashy, brash portrayal of Irving Rosenfeld in American Hustle got all the critical acclaim, his performance in Out of the Furnace offers a more complex emotional punch. Bale remarkably captures the pure desperation of a man who is willing do anything to help his wayward brother. Just below Bale’s afflicted stare is a man who is seething with frustration as his life and those who he loves most are taken away. Casey Affleck, who plays younger brother Rodney, offers yet another solid performance. Affleck achingly emanates the simmering inner turmoil of a military veteran who doesn’t know what to do with his life now that he’s not fighting for his country.

Out of the Furnace’s one female lead, the role of Russell’s girlfriend Lena, is played by the often underrated Zoe Saldana. No moment better exhibits Saldana’s skill as a rising actress than the scene when Russell and Lena reunite. Her facial expressions when first seeing Russell after five years are heartrending. Within a matter of seconds we see shock, excitement, and love, only to just as quickly turn to longing, pain, and regret. It is an example of how a skilled actor can emote so much without saying a word. 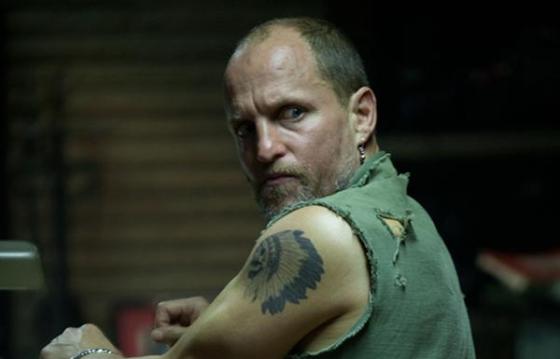 Among a supporting cast that includes Academy award winner Forest Whitaker, and Academy award nominees Sam Shepard and Willem Dafoe, it is two time Oscar nominee Woody Harrelson who steals the show. His deplorable portrait of the ruthless felon Harlan DeGroat exudes an aura of vile depravity. Literally from the film’s opening scene we learn that this man just might be the living embodiment of evil incarnate.

Director Scott Cooper earned a lifelong supporter in me after his masterful directorial debut, Crazy Heart with Jeff Bridges. Upon originally hearing that Out of the Furnace was to be Cooper’s next film, it quickly became my second most anticipated movie of 2013 behind Before Midnight. After seeing it originally in theaters, I have to admit I was a bit disappointed that the film never quite reached the level of greatness I had hoped for. However, revisiting it again now on DVD, I’ve come to the conclusion that perhaps my expectations were just simply too high. While I can’t say my grade for the film has changed, I’m happy that my appreciation for it has. Out of the Furnace is a bleak and emotionally complex tale of regret and loss, and a solid, worthy follow-up to Crazy Heart. I can’t wait to see what Cooper has up his sleeve for his next project, Black Mass.-JL