Posted by amateurcinefile on May 1, 2014 in Cinema Journal

The other day, Michelle introduced to me a film term I had never heard before, the moll. When I asked what exactly a moll was, I was informed that a moll or gun moll was the female companion of a professional criminal. For both Jason and me, one of the most beloved movie genres is the crime/gangster film, and thinking back on our favorites, some of the most indelible and memorable roles would be classified as molls. As we began to come up with a list of our favorite molls, we thought we’d have a little fun and have a moll draft in which we each try to create our best Top 10 performances. Jason was kind enough to give me the first overall pick, allowing him to then have selections two and three; I then had picks four and five, and so on. Surprisingly this goofy idea was kind of fun, so we may do this draft thing again sometime in the future. After you see our selections, be sure to vote on who had the better draft–me of course 😉

In round 1, there was little surprise in either of our selections. Kay Corleone is the top moll in the ultimate gangster film The Godfather, so I was not going to pass up the chance to have her in my Top 10. Jason’s selection of Mia Wallace was a smart choice on his part, and though it pained me to see her off the board, I suspected I had little chance at landing her.

Here in round 2 we had our first surprise choice. I made sure not to mention this prior to our draft, but I had Kay Corleone and Karen Hill ranked numbers 1 & 2 on my draft board, so to say I was excited to see Karen still available after Jason’s choice of Cameron Diaz’s erotically divisive Malkina would be an understatement. I obviously scooped her up with the #4 selection, leading me right into my next selection… 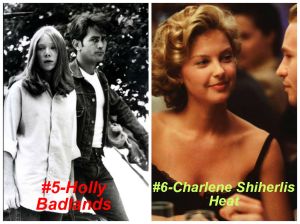 I am a huge fan of Badlands and Sissy Spacek, so it was a no brainer that Holly would be my selection in round 3. When I took her, Jason half joked that he was THIS CLOSE to stealing my beloved Sissy just to mess with me.  I must admit if he had it definitely would have worked. Jason responded to my drafting of Sissy with his selection of Charlene Shiherlis, a very underrated moll performance from the lovely Ashley Judd. If she was available a little later in the draft, I would have scooped her up myself.

Jason’s selection of the lovely Alabama Whitman at pick #7 really cut deep, for we both are big fans of Tony Scott’s crime opus True Romance, and I hoped to pick her at #8. Instead I took the opportunity to grab Ginger McKenna, the crazy, coked out creation of Sharon Stone, which was a nice consolation prize for losing out on Alabama. 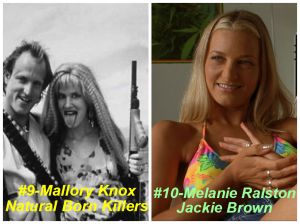 As much as I like Jason’s choice of Melanie Ralston of Quentin Tarantino’s Jackie Brown, I have little problem admitting that I definitely won round 5 with my selection of the Natural Born Killer herself, Mallory Knox. Booyah! 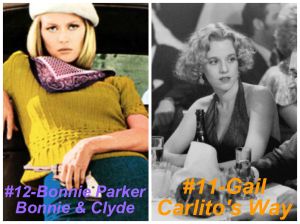 After many rounds of domination, I’m not ashamed to admit that Jason was the victor of round 7 with his selection of the love interest of Butch Cassidy AND The Sundance Kid, Etta Place. However, that’s not to say I regret my choice of Ruth Guthrie. I truly believe Rooney Mara’s moll performance in Ain’t Them Bodies Saints will only grow in appreciation as the film ages. 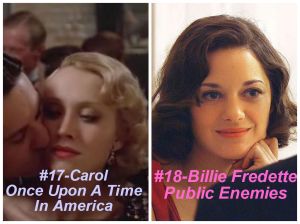 I will call these last three rounds a push, with each of us choosing some personal favorites. I’d like to point out that, unlike Neil McCauley in Heat, with the last pick of the draft I did not leave Eady hanging. So that’s it ladies and gentlemen, our Top 10 Molls. Feel free to leave any thoughts or your own Top 10 lists, and be sure to vote for your favorite list.