Because, like so many of us, I’m a fan of the Lord of the Rings trilogy, I was curiously optimistic when it was announced a few years back that after a long, drawn out contract negotiation, director Peter Jackson was on board to create a film adaptation of The Hobbit, the Tolkien prequel novel about the adventures of Bilbo Baggins. I became slightly concerned when it was then announced that they were fleshing out the one book to create three films, and after watching the stale and uninspiring first Hobbit film, An Unexpected Journey, I decided not to see The Desolation of Smaug in theaters during last year’s Christmas holiday release. However, with my unexpected enjoyment of the Amazing Spider-Man 2 and with Desolation of Smaug just recently released on DVD, I was inspired to give this franchise reboot a second chance. An hour or so into movie, however, I wholeheartedly regretted that decision.

One of the biggest things I’ve learned from studying the truly successful film critics is, they didn’t become truly successful by telling other people their feelings about a particular movie are wrong. So if you’ve been entertained by these Hobbit films, I really am happy for you. Finding enjoyment in the movies we watch is why we love this hobby so much. However, my utter frustration with this latest film almost caused me to pass on putting together a review. But after a couple of days to let it all digest, I felt skipping it would defeat the purpose of this site, which is to share sincere thoughts and observations about the movies we are watching.

Fair or unfair, The Hobbit trilogy is and always will be compared to its predecessor, Lord of the Rings. Watching Lord of the Rings, there’s little doubt that filmmaker Peter Jackson put his heart and soul, his blood and sweat into those films, and that love and passion truly come across on screen. This was obviously his baby, and we were in awe of what he was able to create and felt honored to be able share in it. Unfortunately, that same love and passion just don’t seem to be present with The Hobbit films. I don’t know why, but it almost feels as if Jackson is simply going through the motions. The artistry and virtuosity that were shown throughout the first trilogy have instead been replaced by an absurd overuse of CGI. There were times I felt like I was viewing a video game as apposed to a film. The biggest illustration of this was a scene involving the dwarfs floating in barrels down a raging river. The computer graphics used to create that scene were so flagrantly obvious that at no point would my eyes allow me believe that any drop of the water depicted was in fact even remotely real.

Another glaring example where CGI was used to cut corners was in the creation of the Orcs. I know for those who haven’t seen any of these films the statement I will make about a mythological fantasy creature will be hard to understand, but the Orcs in Lord of the Rings were truly more realistic. Examining the comparison pictures posted just below, you can see through the extensive use of Hollywood make-up, the facial details of the top Orcs are distinctly grotesque. It’s almost as if you can see and smell the funk coming off these beasts, which adds to their fear factor. When compared, even though I can’t imagine how long and arduous it was for the graphic artists to create these images for the film, the computer generated creatures in Desolation just feel like phony, inferior replacements. The skin appearance is too smooth; there isn’t that same meticulous attention to the minute details that the previous make-up artists were able to generate. That awe-inspiring artistry is again missing. 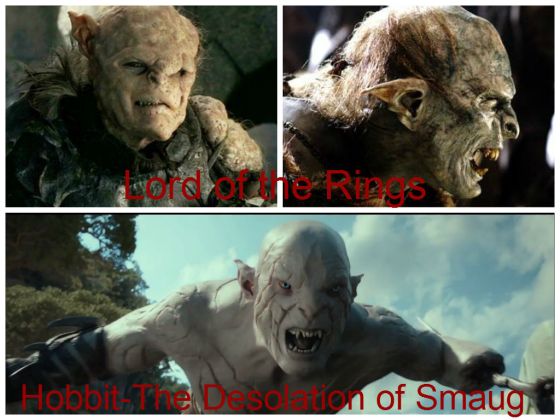 One of the most important aspects when it comes to these types of adventure fantasies is you have to care about the protagonist and central characters you are going on this journey with. Lord of the Rings succeeded wildly at this. I was truly emotionally invested in the well being of Frodo, Sam, Arogorn, Gimli, and Legolas as they tried to save Middle Earth. Now, perhaps this statement is more of an indictment of me than the film, but I find the dwarfs to be annoying and, frankly, I just don’t care about the character of Bilbo. Martin Freeman’s unhurried, almost detached delivery of the character may work for some, but for me he lacks the personality or on-screen charisma to lead such a large franchise.

I understand cliff-hanger endings are part of the bag of tricks at the disposal of a filmmaker. But to spend two and half hours plodding along with this repetitive and stale storyline only to have the film end the way does I personally found exasperated my frustrations with the film. After my displeasure for The Unexpected Journey, I’m almost shocked to say that I have even less appreciation for The Desolation of Smaug, but it is unfortunately true. Now the final question that remains is, since I’m already two thirds into this distressingly middling trilogy, do I dare waste my time with the last film, The Battle of Five Armies, which is scheduled for release in December?-JL