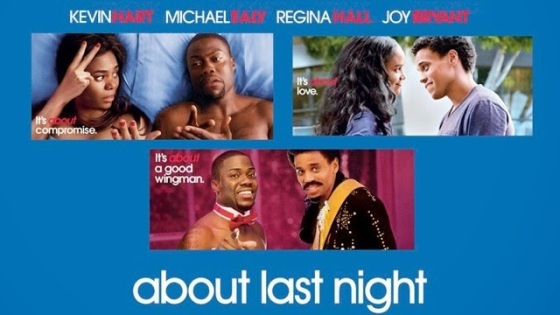 Based on the David Mamet play “Sexual Perversity in Chicago” and borrowing from the 1986 romantic comedy of the same name starring Rob Lowe and Demi Moore, About Last Night tells the story of Bernie (Kevin Hart) and Danny (Michael Ealy), best friends whose late night, alcohol fueled escapades are put in jeopardy when two casual hookups become more serious.

About Last Night was unexpectedly naughtier than I had initially anticipated. Right from the opening credits, the film unabashedly took advantage of its R rating, unleashing a steady barrage of salacious adult talk and humor that added a jocular spice to the film. The principal contributor to the film’s comedic punch is Kevin Hart. After my relative distaste for Ride Along, I’m surprised to say I have now, within the last month, watched all three of Hart’s latest efforts, and About Last Night is the best of the bunch. Calling Hart’s comedic style manic would be a friendly understatement. Like many of his previous efforts, his delivery in About Last Night is equal parts energetically mouthy and verbosely raunchy. His hyper-adult style can rub some raw, but I must humbly admit he had me snickering for most of the movie. 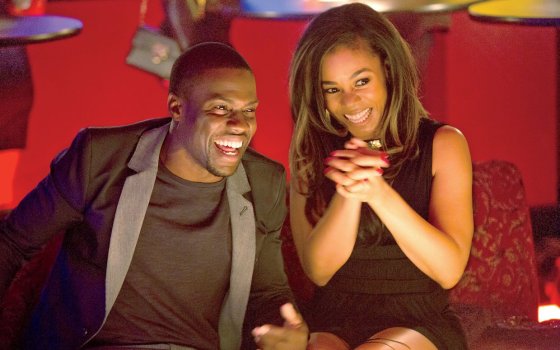 I never thought there’d be a day when an actress/comedienne could offer a performance that matched Hart’s hopped up ferocity, so I must tip my hat to Regina Hall and her nutty portrayal of Joan. Hart’s Bernie and Hall’s Joan embark on an exceedingly irregular liaison filled with heated arguments and outlandish intimate moments. Stealing the show with one comically drunken insult after another, Hart and Hall’s combined demented chemistry (think Vince Vaughn and Isla Fisher in Wedding Crashers) offers a frenzied humor that I just couldn’t stop laughing at.

Balancing out the amusing chaos of the Bernie and Joan show is the sweet and comparatively bland storyline of Danny and Debbie. While their story arc follows the more conventional trappings of the rom-com genre, Michael Ealy and Joy Bryant both bring a playful tenderheartedness to their characters that help make up for their story’s familiarity. We genuinely like them together as a couple, we root for them to stay together, and feel for them when things don’t go as planned.

Formulaic in some parts, entertainingly unpredictable in others, About Last Night is a charming, brazenly naughty romantic comedy that offers a great deal of laughs. Remaking past rom-coms can be a perilous endeavor, but thanks to two genuinely absorbing storylines and the frenetic antics of Hart and Hall, this version of About Last Night created its own identity that entertains all the way through the ending credits.-JL