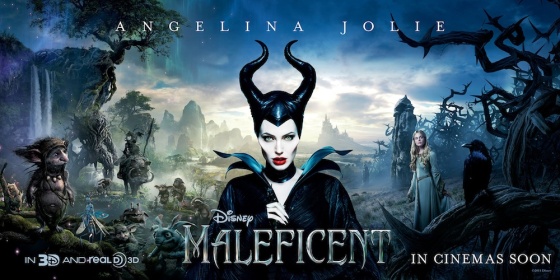 Maleficent, virtuous and kindhearted, grew up to be the most powerful fairy in the Moors, a wooded, magical domain that neighbored a human kingdom. For many years the two worlds lived next to one another in peace, but when a greedy human king attempts to conquer her beloved home, Maleficent comes to its defense. With betrayal and deceit causing her heart to harden, Maleficent vows revenge on the new successor to the throne, cursing his newborn daughter Aurora. However, time as it may, is a healer of all wounds, and as Aurora approaches the age when the curse is to transpire, Maleficent begins to have second thoughts.

Maleficent is just the latest in the inundation of live-action adaptations of classic Disney animated films about to hit theaters these next few years. According to DenofGeek.com, there are plans for live action films of Cinderella, The Jungle Book, Beauty and the Beast, and a Maleficent styled re-imaging of 101 Dalmatians that will focus on the film’s infamous villain Cruella de Vil. Rumors have also been swirling around Aladdin, Pinocchio, The Little Mermaid and yet another Peter Pan film. This weekend’s box office success of Maleficent will only fuel the studio’s fervor for rehashing their back catalog as they try to appease their ever-hungry stockholders.

Angelina Jolie, the film’s obvious star attraction, has been such an enigma to me over the years. Ever since winning her Best Supporting Actress Oscar back in 1999 for her twisted performance in Girl, Interrupted, it’s felt like more often than not her obvious talents have been slightly misspent on a deluge of disposable action spectacles that are rightfully forgotten mere months after hitting theaters. How, you may ask, can I then turn around and praise a performance of hers in a movie that too will probably be forgotten before the year is out? Well, simply put, because her portrayal of Maleficent is a truly enamoring and transfixing performance and an affirmation at least to me that she is still a gifted actress and not just a “movie star.” From the moment vengeance overtakes Maleficent’s heart, Jolie, with the aid of perfectly designed prosthetic cheeks, truly owns and embodies the character. Her cold yet affecting stare exhibits the pain and fury of a betrayed soul and sends chills down your spine. Anytime she is on screen, she turns what could have been a mess of a film into a dark, engrossing fantasy that enchants throughout. I may be going out on the limb with this, but if 2014 turns out to be a down year for lead actress performances, I could see Jolie being a dark horse for a Best Actress nomination. 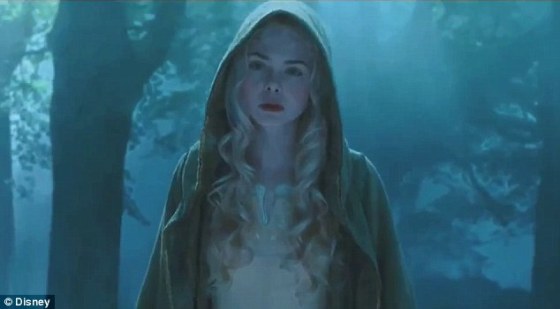 The lovely Elle Fanning was charged with playing the film’s adolescent Sleeping Beauty character Aurora. Glancing over a few other reviews of the film, I noticed some expressed distinct umbrage with her portrayal. Sometimes I think even the most ardent of movie goers (i.e. critics) forget that these actors are playing a character, with specific personality traits and mannerisms. Aurora is your quintessential Disney princess, and as you know, fairytale princesses of the past have generally not been known for their brains or complex personalities. Adding to the character’s perceived timidity is in this retelling of the fairytale, Aurora is a supporting role, not the titled character. Sweet, innocent, sheltered, naive are all characteristics Fanning displays adeptly. And it is that true innocence that Fanning so delicately exhibits that begins to sway Maleficent’s compassion. 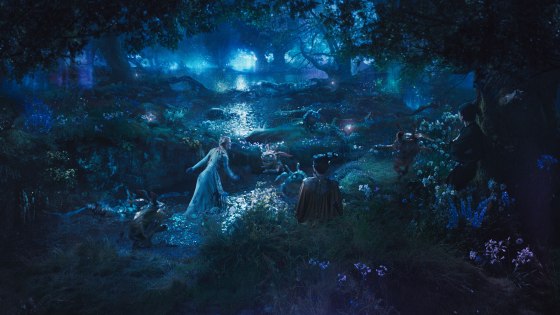 Maleficent toes the line between adult entertainment and not abandoning its childhood roots. The film’s CGI is overtly present, permeating nearly every scene of the film. While in the past I have admittedly had issue with other films using so many computer generated images, surprisingly here I found it aided in the story’s enchanting and magical feel along with bringing to life many of the Moors mystical inhabitants. Aerial shots are colorfully vivid, and the film’s battle scenes, while feeling a bit recycled from previous adventure films, are still hair-raising thanks to the otherworldly monster-like creatures conjured right out of the earth. Unexpected humor also imbues Maleficent. Imelda Staunton, Lesley Manville, and Juno Temple, the three bumbling pixies assigned to guard the infant Aurora have a screwball gregariousness that adds a lighthearted reprieve from the film’s darker moments. Amusing chemistry is also shared between Jolie and Sam Reilly, who plays Maleficent’s trusted servant Diaval.

Entrusting the film’s entire background story to an unknown and untested young actor with only two television credits can be a risky proposition, which made Isobelle Molloy’s surprisingly capable and self-assured portrayal of the young Maleficent during the opening scenes all the more impressive. Molley is definitely a name we should keep an eye out for down the road in future roles. 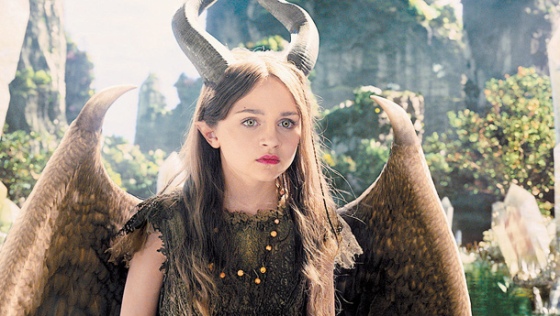 Another young actress to make her big-screen debut is Angelina’s daughter Vivienne Jolie-Pitt. Vivienne was cast to play Aurora at age 5 because it was reported that she was the only young child during auditions who didn’t run away from Jolie when she was in full make-up. While their onscreen time together is but only a few short-lived minutes, their characters’ charming interaction offered one of the film’s lighter moments. 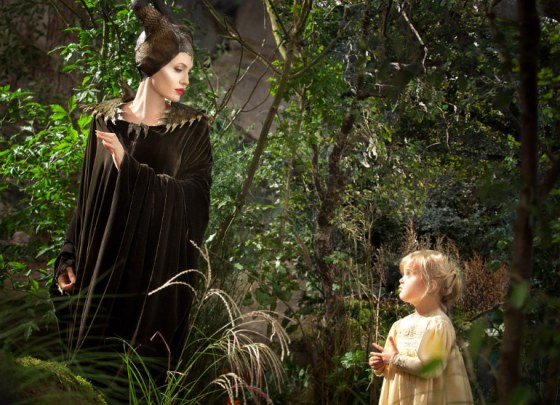 Maleficent offers the perfect outlet to show off just how impressive Angelina Jolie can be when given the right part. While there’s nothing groundbreaking about the film, I can report that Maleficent is an enchanting cinema escape that will entertain both its younger viewers and those older ones looking to rekindle their love for a Disney classic.-JL