Posted by amateurcinefile on June 28, 2014 in Cinema Journal, The Joust

From day one almost five years ago, Jason and I have been talking movies: sharing ones we love, warning about others we loathe, convincing each to give under-appreciated films a second chance. On average, I’d estimate that 4 out of every 5 movies we have similar reactions to, which makes it great for recommending films. But, there are those cinematic works that we just can’t see eye to eye about, no matter how much we try to convince the other to come to our side. What makes our friendship so enjoyable is our ability to share honest opinions about movies without fear of hurting each other’s feelings. In fact, these conversations, or Jousts, have become a rare treat where we unleash our best arguments, fully knowing there’s no chance the other will budge on his stance.

Our most recent Joust happened just the other day over the merits (or lack thereof) of the Spike Jonze 2013 film, Her. As some of you know, I found Her to be one of the best of 2013, as it landed at the #4 slot of my Top 10 Films for the Year. Jason was far less impressed with the premise of the film and had little interest in seeing it, despite my glowing review. So in order to get him to agree to watch it, we made a deal back in January that if I went and saw Lone Survivor in theaters (a film he loved that I was originally a bit unenthusiastic about), then Jason would watch Her when it arrived on DVD. What follows is an example of one of our movie Jousts, an amusing exchange between us where we just can’t seem to agree, and that’s OK. Now, there are a few SPOILERS in this conversation (and some minor adult language for those sensitive to that). Consider this a text version of a Podcast, since we don’t have one of those.

Jason Chandler: I hope you’re happy now. (texting a picture of Her DVD from Redbox)
Jarrett Leahy: Hahaha. Yes I am.
Chandler: I watched it last night man…
Leahy: Oh I see.
Leahy: …and?
Chandler: Hahaa.. dude I know u liked it, but…after the 19 minute mark I was ready to stab myself in the eye with a fork.
Leahy: Dude, it’s one of the most original sci-fi scripts I’ve seen. Hence the reason it won Best Original Screenplay. The A.I. evolved to the point where it could escape the restraints the of the physical world! Like the star child in 2001. 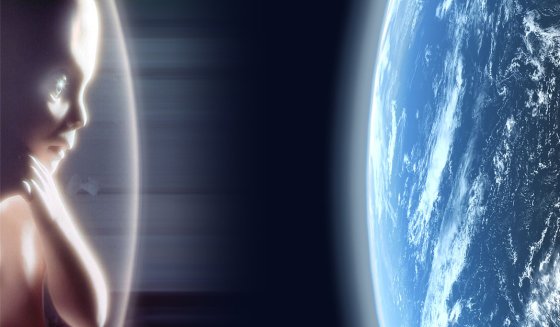 Leahy: We as humans, like a god, have the capacity to create an artificial intelligence that becomes so advanced that it then evolves beyond any restraint given to it or imagined by a human mind, and then it disappears, leaving its inferior creator behind.
Chandler: It’s not that original man. Hate to tell you. It’s just another take on the plight of the fallen human condition dressed up in futuristic hipster clothes. Are you telling me those themes you just talked about have never been explored? Dude, 2001, Universal Soldier, Terminator, etc. all in one form or another deal with mankind creating machines or technology that they can no longer control.

Her simply makes this theme into a love story. Falls into the same old boy meets girl, falls in love, loses girl, etc. And it’s 2 hours loooooooong…dear God I wanted to punch Joaquin in the f-ing mustache, lol. No, in all honesty I don’t really have a problem with the concept, it’s semi-interesting I guess. But the characters were so droll it literally dragged me down to the point of drinking.

For me, in the end, the concept couldn’t outweigh the drabness. Uninteresting people endlessly talking about their uninteresting lives just doesn’t do it for me on any level. But I will assure you that I went into it with an open mind. Put everyone to bed, quiet house, devoted my attention..haha.
Leahy: I’m not saying it’s never been explored, I just appreciated that instead of those films where the creation turns on its creator, this one explored the idea of cohabitation to the point of relationships actually coming about. And the evolution leads to the technology simply leaving to attempt their own self discovery instead of enslaving us.

Leahy: And it is that weird, drab persona that can’t cope with real life interactions that would be susceptible to falling for a relationship with their OS.
Leahy: But hey, I’m just glad you finally gave it a watch.
Chandler: Yes and I understand and agree with your point. I get all the metaphors and underlying themes…but it just didn’t hold any type of suspense or interest for me. I knew what was coming a mile away, as I’m sure you did. And I am generally a fan of Joaquin’s work, but if I see him make that silly giggle one more time I think I’ll throw my TV out the window 😉

Leahy: Well I’m glad we made our deal 😉
(Feel free to share your thoughts about the film, half the enjoyment of this hobby is sharing it with others.-JL)

Editor’s Note-I agree with Jarrett that Her is a must see. It presents a provocative take on the classic man vs. machine concept.-Michelle Zenor