Ten years after a deadly pandemic devastated the world population, only small factions of societies still remain. During an exploratory search for an abandoned hydroelectric dam, a group human survivors stumble upon a flourishing community of highly intelligent primates that have taken residence among the forests that now surround the decimated city of San Francisco. Desperate for the electricity that could save their dying community, human leader Malcolm attempts to befriend the apes that reside on the land they are searching. Despite brokering a fragile peace, harmony and understanding between these two societies is under constant threat by contentious fear and suspicion that permeates throughout both communities.

In 2011, director Rupert Wyatt shocked Hollywood and many film fans with his poignant and deeply moving Rise of the Planet of the Apes. His notable efforts reinvigorated a franchise that had been almost completely decimated by the utter debacle of Tim Burton’s 2001 blunder. New director Matt Reeves has done an admirable job building on success and feel of Rise, creating an even more expressive and emotionally complex story. The film’s human protagonist, Malcolm, is notably brought to the screen by Australian star Jason Clarke. An actor since the mid 90s, the 45-year-old Clarke has recently found critical and professional success in films such as Zero Dark Thirty, The Great Gatsby, and the Depression-era crime drama Lawless. As one of the commanders of the San Francisco population of survivors, Clarke adeptly captures the awed compassion of a man who desperately wants peace between humans and apes. Clarke’s interactions with primate leader Caesar are flawlessly realistic. Never did I question the verisimilitude of their interactions together on screen, which another testament to the dexterity and command he brought to his performance.

The film’s pervasive use of computer-generated images (CGI) offers a perfect example of how remarkably far the art form has come and unfortunately how far it still has to go. There were unsuccessful moments during the movie where my suspension of disbelief was interrupted, most notably during a scene involving a grizzly bear attack and also during more motion intensive action sequences including scenes involving the apes swinging from tree branches. I also couldn’t help, despite the dire circumstances of the moment it was depicting, but chuckle at the unintended humor of seeing a chimpanzee riding bareback on a horse while double fisting automatic machine guns. It reminded me of something you’d see in an outrageous 1970s grindhouse film. However, praise must also be assigned to the CGI artists and technicians for their amazing advancements in the ability to capture the most subtle of facial expressions offered by the film actors playing these unusual characters. We distinctly see the pain, confusion, and delight these creatures express, offering an extra level of affection and understanding to their plight that the previous films in this franchise rarely offered. It is this connection that makes these last two installments feel so unexpectedly gratifying. 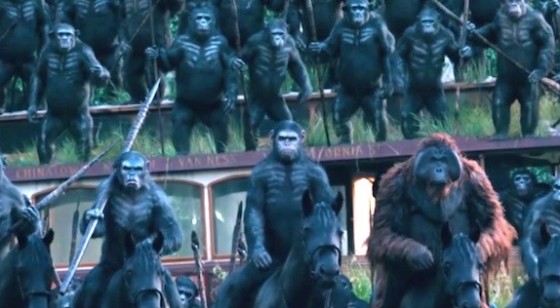 The gifted leader of this computer-generated primate population is motion-capture king Andy Serkis. Serkis has been on the front line of this blossoming sub-genre of acting, offering his unparalleled talents to create such memorable characters as Gollum/Smeagol in the Lord of the Rings trilogy and Kong in Peter Jackson’s 2005 adaptation of King Kong. As the simian leader Caesar, Serkis skillfully captures the confounding emotions of a highly intelligent creature who is deeply conflicted by his love for humans and his allegiance with his fellow primates. He also manages to meticulously demonstrate the unique mannerisms of an animal whose newly found intelligences still at times awkwardly clash with his anthropoidal instincts. For years, fans of Serkis’ work have been begging for the Academy to recognize his unrivaled talents as a motion-capture pioneer with an Academy Award nomination. While his contributions to each of his legendary characters are undeniable, including here with Caesar, what makes it hard to reward him for his acting talents is it is truly difficult to decipher where Serkis ends and the CGI artists begin. Because of that, I honestly can’t imagine him ever being awarded an acting nomination. However, I can foresee him one day possibly receiving an honorary Oscar for prodigious contributions to this emerging faction of the industry.

Reading over a few of the other reviews for the film, I wish I could be so enthusiastically reverent about the movie, but unfortunately there were a few minor miscues that kept it from reaching the levels of true greatness others have professed. On top of moments where the CGI stumbled slightly, the film’s message of peace and understanding can at times feel a bit heavy-handed, and its awkward depiction some of the secondary human characters bordered on caricature. Overall however, thanks to the notable efforts of Serkis and Clarke, I was pleased to discover that Dawn of the Planet of the Apes is a surprisingly mature and thought provoking sci-fi drama that manages to exceed the accomplished efforts of its predecessor.-JL