"The only true currency in this bankrupt world is what you share with someone else when you're uncool."
3 Comments

After being fired from the record label he helped establish, Dan drunkenly stumbles into an East Village bar and, by mere happenstance, comes across a young woman singing during an open mic night. Mesmerized by the untapped artistry of her songwriting, he convinces her to embark on an unusual collaboration, spurning the traditional studio setting and instead recording her songs amidst the iconic cityscape of Manhattan.

Writer/director John Carney caused quite a stir in the indie world back in 2006 with his low budget sensation Once, the story of a chance encounter between two gifted musicians and the magical week spent together writing and recording their touching collaborations while exploring the Irish city of Dublin. Once was so beloved it was later turned into a Broadway play that went on to win eight Tony Awards including the Best Musical of 2012. With Begin Again, Carney desperately attempts to catch lightning in a bottle twice, dressing up the basic premise of Once with a change in location while modernizing the story to better fit the growing uncertainties in the current music landscape. 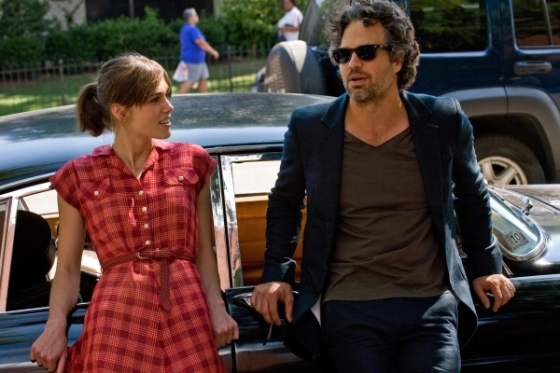 The story hinges on the shoulders of our protagonist, Gretta, a British songwriter who followed Dave, her musician boyfriend and writing partner, to New York City as his career begins to take off. Predictably, Dave finds the temptations of his newly found fame too enticing, and Gretta is forced to set out on Hollywood’s much beloved and well-worn path of discovery and growth as an artist and independent woman. Keira Knightley was brought in to play Gretta after Scarlett Johansson had to drop out. Sadly I must declare Knightley was simply miscast for this role, as her cultured and prim British persona never convinced me she was this expressively capable singer/songwriter. On top of that, while it was honorable for her to try, if we’re being totally honest here, she can’t sing. I suspect much of the film’s innoxiously bland music was selected to help mask that glaring fact. I could have seen an actress like Brie Larson or Mae Whitman offering a much more credible and convincing portrayal. Regardless, they should have seriously considered dubbing Knightley’s vocals.

Mark Ruffalo has established himself as one of the most respectable and downright charismatic leading men in Hollywood, which is what kills me about his role in Begin Again. The humor Carney infused into the role of Dan simply made Ruffalo come off as a callous, childish douchebag. Even with his stereotypical story arc of redemption and renewal, at no point did the film ever give me an honest reason to root for this man. What’s worse, the believability of this supposed creative partnership between these two was severely lacking, as I found their on-screen pairing to be awkwardly contrived.

The supporting cast offers yet more examples of miscast and underutilized talent. Two-time Academy Award nominee Catherine Keener was relegated to the snarky estranged wife and glorified chauffeur. Hailee Steinfeld, an Academy Award nominee in her own right, is too talented a young actress to be playing these cliched hormonal teenybopper parts. In all honesty, for as little as they gave her to do, they would have been better off casting an unknown for her role. And then there is Adam Levine, the lead singer of Maroon 5 and adored judge on The Voice. While it was glaringly obvious he has very little talent as actor, I must give him kudos for bringing just enough charisma to his portrayal of Dave to avoid completely falling flat on his face. Although if he had, it might have helped cover up that awful beard he was sporting for half the movie.

With the tremendous success of Once, Carney should have been first to understand how vital a killer soundtrack can be to the success of a film, especially when the subject matter involves the music industry. I was floored then by how grievously banal and vanilla the music chosen for Begin Again wound up being. The whole premise of the movie was built around the idea that this down-on-his-luck record executive has just discovered an artist whose talents as a songwriter are so eye-opening that it inspires his fervent backing and support. However, nothing Gretta wound up “creating” warranted anywhere close to the impassioned response it got from Ruffalo’s character.

I desperately wanted to like Begin Again, but when a film has one miscast lead, another who is a drunken, insolent windbag, and truly uninspired music, it is movie that was doomed to flounder. Writer/director John Carney tries hard to recapture the musical magic of Once, but everything that was right about Once is instead replaced with Hollywood banalities and artificial contrivances that beg us to feel for these people that honestly just don’t deserve our time of day. Begin Again should have been a sweetly absorbing story, unfortunately, it tries so hard to be infectiously charismatic that the final product left me almost comatose from the saccharin overdose of cliched sentiment.-JL