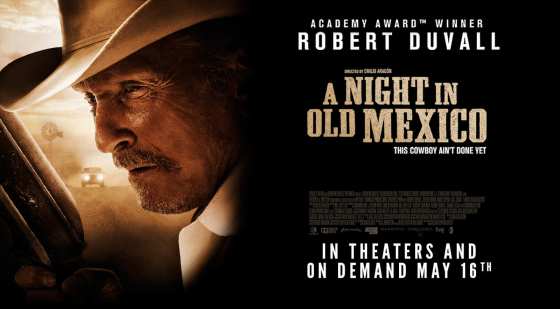 Instead of placidly settling into the trailer home picked out for him after being forced off his farm, aging rancher Red Bovie decides to take his newly discovered grandson on a wild road trip to Old Mexico for one last hurrah of booze and women. Unfortunately, their night of debauchery takes a perilous turn when they inadvertently get caught in the middle of a drug deal gone wrong.

If I created a list of my favorite actors (which isn’t a bad idea, stay tuned) Robert Duvall would easily be somewhere in the top five. His resume of iconic films and performances, including some of the western genre’s most beloved movies (Lonesome Dove, True Grit, Open Range), is beyond reproach. I imagine it was his intimate connection with the western that initially drew him to A Night in Old Mexico. Unfortunately, Duvall winds up being the only redeemable aspect of this mediocre creation. Channeling his go-to charismatic persona, Duvall’s command of the screen helps overcome many of the glaring deficiencies in the film’s five-cent script, keeping the movie from completely tanking into the depths of abysmal schlock.

The same way country music is mocked for having stereotypical subject matter, the western genre has long been known for indulging in storyline subplots that can be considered at times a bit cliched. Unfortunately, A Night in Old Mexico tries to take practically every one of these well-worn banalities and crudely jam them all into this story, turning the film into a pitiable caricature. It was almost as if they had a checklist of characters and situations. Cantankerous old cowboy and a long-lost grandson? Check. Farmland being forcibly taken? Check. Getting-to-know-you road trip to Mexico complete with booze, broads, drug deals gone bad, proverbial shootouts, and a helpless Mexican girl? Check, check, check, and check. What exacerbates the problem even more is each of these narrative developments is delivered by hopelessly wooden, one-dimensional characters hampered by dialogue that is painfully clumsy at times.

Disappointingly, the film’s worst offender is Jeremy Irvine and his fish-out-of-water character, Gally. Irvine’s performance (or lack thereof) brings up the age-old question that arises when there is a glaringly subpar performance. Was it the actor’s lack of talent or grasp of the material that was to blame or simply a poorly written script? While time will tell about Irvine’s true skill as actor, I do recall being sincerely impressed with his poignant portrayal in The Railway Man which makes me lean toward casting more of the blame for this dopey performance on the film’s tripe screenplay that I’m shocked to report was penned by noted screenwriter Bill Wittliff, the same writer who gave us Legends of the Fall and Lonesome Dove. This, however, does not let Irvine completely off the hook. His absurd portrayal during the film’s final scenes almost single-handedly sank this already leaking boat. With his career still in its infancy, Irvine better hope this film dies a quick obscure death.

A Night in Old Mexico is the second feature directorial effort and first English-language film of Spanish filmmaker Emilio Aragon, best known for his work in Spanish television. Sadly, if this is the best he can do, perhaps he may want to stick with television. A Night In Old Mexico is a stale, second-rate work that falls far short of even my tepid expectations. While Robert Duvall is undoubtedly the best thing about this cliched, present-day western, sadly, he should have simply said no to this trifling piece of forgettable cinema.-JL