"The only true currency in this bankrupt world is what you share with someone else when you're uncool."
5 Comments

Posted by amateurcinefile on September 7, 2014 in 2014 Film Reviews 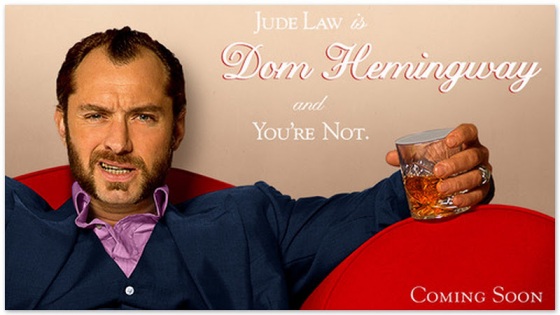 When lifelong hood Dom Hemingway refuses to offer information in exchange for a lighter prison sentence, it costs him not only 12 years of freedom, but also the chance to see his young daughter grow up. Now released back onto the streets of London, Dom sets out to collect the money he earned for keeping his mouth shut and attempts to reconnect with his estranged daughter.

Dom Hemingway is the brainchild of Emmy-winning writer/director Richard Shepard. Shepard, who is best known for his work on the hit TV shows Girls, Ugly Betty, and Criminal Minds, has also dabbled in feature films, finding moderate success with his 2005 black comedy, The Matador starring Pierce Brosnan and Greg Kinnear. Dom Hemingway is Shepard’s seventh directorial effort, and right from the film’s opening scene, where we are introduced to our title character as he receives fellatio from a questionable benefactress while offering a reverential speech about the greatness of his “unit,” the goal of Dom Hemingway is to shock its viewer with an endless barrage of rude, crude, and downright vulgar humor. Shepard, who also wrote the screenplay, has a surprisingly adept familiarity with British slang and crassness. In fact, if I hadn’t read he was a native New Yorker, I would have guessed Shepard was yet another up and coming British filmmaker. 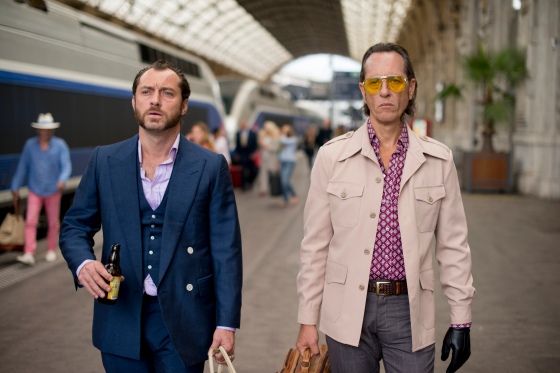 Unfortunately, Dom Hemingway’s biggest downfall is it’s a film that doesn’t know what it wants to be. Shepard spends the first hour enthusiastically revealing the debaucherous crime world of his sleazy protagonist. While a bit commonplace and unoriginal, it at least fits the irreverent mood his lead character works so hard to establish. The first signs of trouble, however, come with the film’s highly stylized cinematography. While admittedly fun to look at early on, it inadvertently added a flamboyant level of caricaturization to this crazy cast of personalities who could already be described as underworld stereotypes. Fueling my frustration even more was the inexplicable turn the film’s final act takes, as Shepard curiously attempts to make Dom Hemingway into some sort of unorthodox story of redemption. Shepard’s haphazard and contradictory change of pace comes off feeling contrived and false to the true nature of who Dom Hemingway is—an uncivilized and unapologetic bastard.

Dom Hemingway’s one redemptive element is the transformative performance of its exceedingly talented lead star. As if we needed more proof of the impossibility of pigeonholing Jude Law, Dom Hemingway, Law’s latest feverish unleashing, offers yet another varied wrinkle to a resume that already includes Gattaca, The Talented Mr. Ripley, Road To Perdition, A.I., Cold Mountain, Closer, Sherlock Holmes, Side Effects, and many more. Law’s ability to infuse just the right amount of genuine charisma to his irreverential portrayal turns this contemptible and depraved individual into more of a sympathetic ne’er-do-well. While reaping the benefits of Shepard’s gift for amusingly vicious dialogue, Law’s profanity-laced rants are delivered with such precise timing and crazed ferocity that I was left astounded this was the same Jude Law I had become accustomed to watching.

Too much sentimentality to be a noteworthy black comedy, too much vulgarity to genuinely embrace the film’s strained attempt at redemption, filmmaker Richard Shepard’s skill for comedic dialogue couldn’t help revive his narrative choices, as Dom Hemingway’s lack of a true identity leaves it feeling like an unbalanced patchwork of stale crime conventions and cliches. Luckily, Jude Law manages to thoroughly immerse himself into this maniacal character, carrying this wonky story to a level of respectability by sheer force. While he’ll never win any awards for his performance, this will definitely go down as one of his most audacious roles. Dom Hemingway is a compellingly frustrating movie where its outlandish lead performance outshines a flimsy, hodgepodge storyline. “I’m Dom Hemingway!” Yes you are Jude, and you deserved a better story to help showcase your zealous portrayal.-JL