Raised by nuns after being orphaned during the second World War, Anna is now a novitiate who is just weeks away from taking her final vows. However, before she is allowed to join the order, the Mother Superior informs her she must visit her only living relative, Aunt Wanda. Emotionally aloof, Wanda cautiously agrees to join Anna on a pilgrimage to help unearth family secrets long since forgotten over time. As Anna learns truths about her biological family, she finds herself on an emotional journey of personal discovery and reflection that has her questioning which path in life is right for her.

Most years I average somewhere between 80-100 new movie viewings, a great majority of which fall somewhere between pretty good to pretty forgettable. But if I’m lucky, I stumble across a truly extraordinary piece of cinema that leaves me staggered with adoration. In 2014, I assumed I had seen my venerated film after experiencing Richard Linklater’s one-of-a-kind creation, Boyhood. But after Monday night, I must amend my outlook for the movie year, as Boyhood now has company with Pawel Pawlikowski’s hypnotically devastating drama, Ida. Originally a documentarian, Pawlikowski received critical acclaim for his second feature film, Last Resort (2000). With Ida, his fifth feature, Pawlikowski has achieved true greatness, creating an affecting drama that is both chilling and intoxicating in equal measures. Set in 1962 Poland, Ida captures the uncertainty of an area under the grips of Communism after escaping the tyrannical grasps of the Nazi regime. At only 82 minutes, I found it quite astonishing that Pawlikowski is capable of packing such an emotional wallop in such a short amount of time.

Reminiscent of a young Sissy Spacek (or Claire Daines according to my lovely editor), Ida’s unknown headliner, Agata Trzebuchowska, is an angelic beauty whose striking physical characteristics are only accentuated by the mesmeric effects of the black and white cinematography. Discovered by a friend of the director while out at a cafe, Trezbuchowska’s unique natural gifts as an actress are even more impressive upon discovering that she has never acted before. Quiet, solemn, earnest, Trzebuchowska superbly captures the sedate persona of this young woman of faith. In contrast, veteran Polish actress Agata Kulesza embodies the smoldering anger of a woman who has experienced some of life’s worst atrocities. Her raucous and foolhardy behavior masks an emotionally damaged individual who has tried to drink away memories too painful to accept. Together, these two women offer superb portrayals, carrying Ida to an emotional depth seldom experienced in today’s cinema. 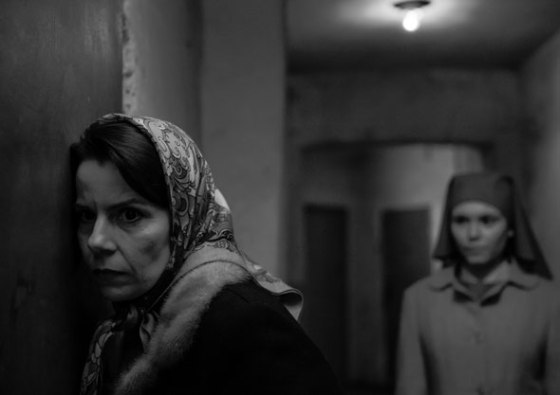 Rarely will you find visuals as impeccable as Ryszard Lenczewski’s astonishing cinematography. Like a piece of fine art come to life, Ida is a beautifully shot black and white film. Filmed in 4:3 aspect ratio, Lenczewski’s utilization of atypical visual scale and unexpected camera angles plays off the film’s haunting images to perfection. The camera, so still for most of the film, seems to wait an extra count before turning away, making sure we amply grasp the full impact of what Pawlikowski wants us to see. Trying to pick a favorite scene is nearly impossible; I found myself hypnotized by the film’s eerie, dreamlike snowstorms, a smoke-filled jazz bar, Anna’s twirling in a sun drenched window curtain, and an impeccably shot view from the backseat of Wanda’s car as the wooded road rushes by in the periphery. If for anything else, Ida needs to be seen to witness the art of making motion pictures at its finest.

A poignantly absorbing masterwork, Powlikowski’s somber drama offers what might be the best black and white cinematography I’ve ever seen. Like a Maria Falconetti of the 21st century, Agata Tryzebuchowska has come out of nowhere to give a truly spellbinding portrayal that only grows in stature when one considers she is true newcomer to the art of acting. Awarded Best Film at the London, Warsaw, Gdynia, Gijon, Les Arcs, Minsk, Polish, and RiverRun International Film Festivals, Ida is one of the finest examples of what world cinema has to offer and is no doubt one of the best movies of 2014.-JL