Posted by amateurcinefile on March 3, 2015 in Cinema Journal, The Joust

Before 2014 too quickly recedes into our rear-view mirror, we would be wrong not to backtrack just a bit in order to recognize the 20th anniversary of one my all-time favorite films. For this edition of The Joust, I imagine there will be more agreeing than debating, as Jarrett and I discuss the impact of the great Pulp Fiction.-JC

Jason Chandler: I know we both love this movie, as millions of others do, but for me it’s one of those films that started me on a path to becoming interested in the movie-making process. When I saw it for the first time in my college dorm with my roommates, I was equally shocked and fascinated. It pushed passed a lot of boundaries. I really think Tarantino created a whole new movie audience, in a totally new and fresh way, in the 90’s.

Jarrett Leahy: You are correct in your assumption that this latest Joust will be much more cordial than our first one a few months ago where we discussed the merits of Spike Jonze’s masterpiece, Her 😉 Building on your praise, Pulp Fiction was and remains a complete game changer in the world of cinema. It inspired a cottage industry of copycats, giving inferiors like Guy Ritchie a career. However, where we differ is our paths to Pulp Fiction enlightenment. Upon its initial release, I was the robust age of 11. Thankfully, my father had little issue ignoring the R-rating and allowed me to sit in while he watched the Blockbuster rental. While admittedly I had little comprehension for what was truly going on, I remember being wide-eyed by Tarantino’s L.A. underworld crime opus. It was only after I went off to college many years later that I decided to step back into Tarantino’s singular world, and while, even at age 19, I was still unsure of exactly what I was witnessing, I knew I must see it again…and again. 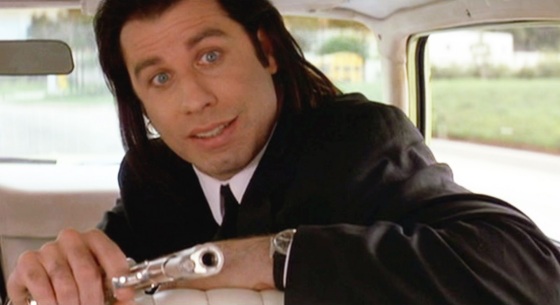 Chandler: That is great stuff. I would have liked to have seen 11-year-old Jarrett’s eyes widen at the sight of Marvin meeting his untimely demise in the midst of Vincent Vega’s “miracle rant.” I know when we first met, Pulp was one of the first movies we found ourselves dissecting, quoting, and re-watching. Despite the insanely good list of films Tarantino has created, I still feel Pulp Fiction is the undisputed champ in his catalog. Where do you come out on that?

Leahy: You recently sent me a link where two Grantland writers discuss the merits of Michael Mann’s film resume, and one of them noted when discussing the film Heat, “Because of how ubiquitous and popular Heat is, we try to downplay how much we love it.” I think there are times I feel the same way about Pulp Fiction. The film’s reputation and acclaim is so huge that it almost feels tiresomely obvious to profess a personal reverence. It’s like saying, “The Godfather is a flawless masterpiece.” But there’s little doubt that, for me as well, Pulp Fiction is Tarantino’s best film. The battle for the number two spot can be a heated debate; Inglourious Basterds, Django Unchained, The Kill Bills, Jackie Brown, and Reservoir Dogs all have a legitimate claim for the runner-up spot, but none of them has topped the magic of his sophomore effort. Saying that, with my loyalty to Pulp, I must confess I’m not sure I’d be able to concede its throne if Quentin ever does make a better film.

Chandler: It’s mind blowing to consider that all of those films play second fiddle, right? Inglourious, Django, Reservoir Dogs, Kill Bill – if any one of those were made by almost any other director, it most likely would be considered their crowning achievement. But the fact that they all belong to Tarantino and that they can’t dethrone the champ says a whole lot about Pulp as well as QT’s career. So what do you make of Tarantino’s impact after 20 plus years? Hard to think of any other director who has hit so many home runs with virtually no strikeouts in his first two decades (No I don’t consider Grindhouse a strikeout).

Leahy: You’re right, there are very few modern directors who have had such a consistent run of success right from the beginning of their careers. A few that come to mind are Paul Thomas Anderson, Wes Anderson, maybe David Fincher (if you forgive Alien 3), but it seems that even the best filmmakers have a few duds in their movie-making closet. As for your assertion that Grindhouse was not a strikeout, yes I agree; when taken in context of what Quentin and Robert Rodriguez were trying to do with Grindhouse, that project was a success. But, I must concede that I found Rodriguez’s Planet Terror to be more entertaining than Quentin’s Death Proof. 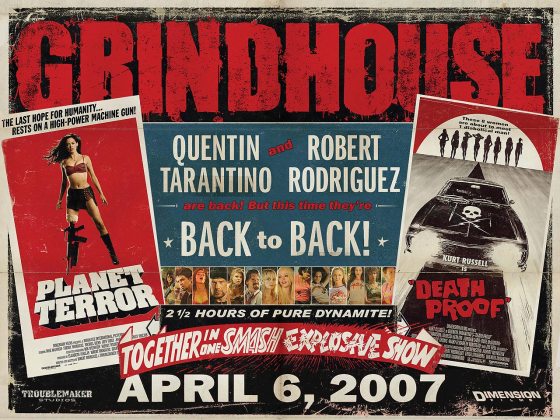 Chandler: Planet Terror was pretty cool, I’ll give you that. Speaking of Robert Rodriguez, he recently interviewed QT on his Director’s Chair series. Tarantino spoke to the fact that the relative lack of box office success for Grindhouse marked the first time he felt a sense of pressure to up his game. I got the sense that in his mind, that was his low point. Needless to say he came out swinging on his next two, so I really don’t see him bogging down anytime soon.

Leahy: So how much longer do you see Tarantino doing this? Can you foresee a day when his audience gets tired of his fan-boy stylings? Do you think he’ll ever venture out to make a more mature piece of cinema or, like most auteurs, stick with his style till the end? I’ll be curious how well his resume ages and whether younger generations of movie fans embrace his trashy, over-the-top sensibilities the way we have. I fear he may overstay his welcome, lose his touch, which could jeopardize his reputation and that of his work.

Chandler: It’s a good question whether audiences will continue to respond to QT’s work. I’m prone to believe they will, simply because he will continue to be the alternative to mainstream cinema, a.k.a. Comic book movies. As for venturing out, I imagine Tarantino’s choices will continue to evolve within his particular style, as it has with Django and Inglourious. But I don’t think and hope that he won’t ever settle for making a “conventional” movie. God knows we have plenty of those to go around.

Chandler: Well, Its obvious we could chat about QT’s career and impact for a long time. Twenty years since its release, Pulp Fiction remains one of my Top 3 favorite movies of all-time, and I’m not sure that will ever change. Even with the accolades he has received, I believe Tarantino’s legacy may mirror that of Hitchcock, in that his greatness won’t truly be appreciated until a certain amount of time has passed. Forty years from now I believe film junkies will consider Tarantino to be not only the most influential director of his time, but also the most singular. Before I throw it back to you for your closing thoughts, consider this: The average IMDb score for QT’s first eight movies is 8.1, and his Rotten Tomatoes average critical score is 84%. Pretty impressive digits by any stretch. That wraps it up for me for this edition of The Joust. It’s been fun.

Leahy: Those numbers are impressive, and I hope you’re correct in your prediction about Tarantino’s legacy. I must confess being a little more pessimistic in how influential he will be seen as. Personally, it feels to me that his influence has already produced whatever copycats there were going to be, all of whom proved far less talented than QT—which brings me back to the original premise of this Joust, just how great Pulp Fiction was and still remains. Despite a decade of studio copycats, no filmmaker has ever come close to the visceral power and supremacy of what Tarantino was able to unleash twenty years ago. And I think that will be his lasting impact, creating a film that still shocks, captivates, and entertains despite every major studio’s attempt to steal its thunder and cash in on its brilliance and ingenuity.

Well, it’s been interesting having such an agreeable Joust, but next time lets make sure we pick one of the rare films we don’t quite see eye to eye on. JL signing off…