This week’s Top 6 List is in honor of Brad Pitt, who can finally be called an Academy award winner after receiving an Oscar for his producer credit on 12 Years a Slave. When examining resumes of actors considered movie stars, rarely do you ever hear them described with words like diverse or risk taking. But if you closely examine a film list of Brad Pitt, you will find an amazing range of genres and roles that lesser actors would not have the skill or courage to attempt. In fact, I still hold out hope that one day he’ll receive an Oscar for his underrated acting talents. With this week’s list however, I did not want to just highlight the six films I personally think are his best but instead shed some light on movies and performances I feel should truly be better appreciated in the hope that more people will give these films a chance…or second chance. 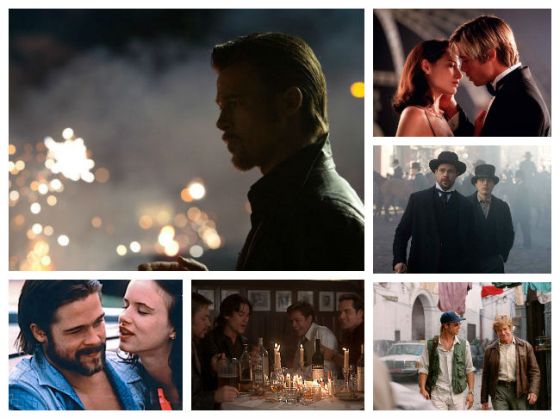 6. Kalifornia (1993) A journalist and his photographer girlfriend embark on a road trip to research various serial killer murder sites. Unbeknownst to them, one of the two companions who tagged along to help pay for gas is in fact a serial killer himself. Released a year before Natural Born Killers, Kalifornia was initially written off by critics and all but ignored by film fans. However, over the years it has built a bit of a cult following thanks in large part to Pitt’s terrifying and immersing performance as serial killer Early Grayce.

5. Sleepers (1996) After a prank goes tragically wrong, four childhood friends are sent to a youth detention center where they are abused by the guards in charge. Now adults, a chance encounter with one of the former guards leads to an unexpected opportunity for revenge on their attackers. Brad Pitt plays Michael Sullivan, an assistant district attorney who is in charge of the subsequent trial. Joining Pitt in Sleepers is a top notch cast that includes Robert De Niro, Dustin Hoffman, Kevin Bacon, Minnie Driver, and Jason Patric. The greatness of Sleepers is despite its very difficult subject matter, the lasting image and feeling of the film is the heartfelt camaraderie shared between these four lifelong friends.

4. Spy Game (2001) Pitt teams up with Robert Redford (another movie star who’s acting talents have also been taken for granted over the years) in this tense C.I.A. spy thriller. When Tom Bishop (Pitt) gets caught attempting to break out a prisoner from a Chinese prison, retiring C.I.A. agent Nathan Muir (Redford) is forced to act quickly before the higher ups in the agency act on political paranoia and cut ties with Tom, sacrificing him in the name of bureaucratic diplomacy. From the opening scene, it’s an absolute treat seeing the genuine affinity between these two giants of their profession, with each playing off the other in this taut, fast-paced thriller directed by the late Tony Scott.

3. The Assassination of Jesse James by the Coward Robert Ford (2007) The first of two collaborations between Pitt and director Andrew Dominik on this list, Assassination is a dreamlike, highly stylized western that tells the story of the last days of famed outlaw Jesse James. Joining Pitt, who plays the title character, is an impressive cast that includes Casey Affleck, Sam Rockwell, Jeremy Renner, Sam Sheppard, and Mary-Louise Parker. Heralded by some as Pitt’s finest performance, The Assassination of Jesse James was criminally ignored upon its initial release by Warner Bros., who publicly expressed concerns over the editing of the film. Pitt’s backing of Dominik’s vision for the movie helped get the studio to back down, but in turn they refused to give any advertising support to the film. A strong showing at the Venice Film Festival that included Pitt winning the Best Actor award helped build on the positive word of mouth surrounding the movie leading to Assassination being named to twenty different critic top-10 lists for 2007.

2. Meet Joe Black (1998) Pitt joined Academy award winner Sir Anthony Hopkins in this romantic fantasy directed by Martin Brest of Scent of a Woman and Beverly Hills Cop fame. William Parrish (Hopkins), an aging media tycoon is asked to be the guide for Death, who has taken human form in the body of a young man (Pitt) with the hope to learn more about life on Earth. Pitt’s wide-eyed and innocent portrayal of “Joe Black” is sublimely poignant, as this supernatural entity learns about the smaller pleasures in life, like the calming effect a spoonful of peanut butter can offer. The sizzling chemistry between Pitt and Claire Forlani, who plays William’s daughter Susan, is another of the film’s high points. Over the years some have expressed issues with the film’s almost three hour length. But I have found if you truly buy into this supernatural story and its perfect cast of characters, the film’s length only aids the telling of this charming, picturesque tale.

1. Killing Them Softly (2012) Based on the George V. Higgins 1974 novel, Cogan’s Trade, Pitt and director Andrew Dominic team up again for this stylized drama about the dirty underworld of organized crime. Killing Them Softly tells the story of Jackie Cogan (Pitt), a mob hit man called in to clean up the mess caused when three low level criminals rob a mob-run card game.  Along with a first-rate gangster story, Killing Them Softly is also a biting, whip-smart allegory of the 2008 U.S. economic crisis and is the perfect example of the artistic chances Brad Pitt has been taking lately with his choice of movie roles. The chief complaint about the film generally revolves around its political message, but some have expressed issues with there being too much dialogue and not enough action. I think it’s a shame that somewhere in the last decade, smart, sharp, highly crafted dialogue has become something of a detriment to a film as opposed to the highlight it should be. My hope is, as time passes, more people will recognize the gifted filmmaking talents present in this slick crime drama.-JL