The Grand Budapest Hotel is crime caper, murder mystery revolving around the exploits of Gustave, a legendary concierge working at the famed and luxurious European hotel, and his newly hired lobby boy and confidant Zero Moustafa. Ever the lady’s man, Gustave inherits a priceless painting, Boy With Apple, when the very wealthy heiress he was having relations with suddenly passes away under suspicious circumstances. When Gustave is framed and hauled away for her death, Zero is compelled to right this injustice brought upon his beloved mentor. 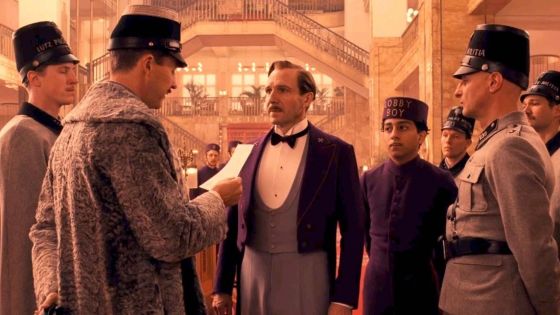 The Grand Budapest Hotel is a deviously clever comedic drama filled with sharp, witty humor. Ralph Fiennes expertly personifies the charmingly cunning character of Gustave, and Tony Revolori’s portrayal of Zero is sublimely comical. Together they share genuine affection and good-natured camaraderie that is only strengthened by the absurd situations the two experience together.

Director Wes Anderson has long been known to have at his disposal a stable of extremely talented and loyal actors that jump at the chance to be involved in any project he is working on. So along side these two great leads is an extraordinarily gifted ensemble of amazing supporting stars who bring their own unique set of acting gifts. Being even a small part of Anderson’s universe brings an obvious joy that is exuded from each member of this top notch cast.  The highlight of which is Willem Dafoe’s character Jopling, a homicidal sociopath who will stop at nothing to get the family fortune he covets.

As a long time fan of Wes Anderson, it’s been a true joy to see him and his elegant, artistic styling slowly being more accepted by mainstream cinema. In an ever-growing world of prequels, sequels, and superhero overload, it’s refreshing to know that filmmakers like Anderson can still be successful without having to compromise their artistic vision. Anderson’s artful use of lavish set pieces gives each of his pictures a distinct look and feel. Once familiar with his styling, it only takes a few scenes to realize you are watching one of his films. As for The Grand Budapest, some may find it difficult to fully grasp or appreciate the exaggerated outlandishness of the story. But for those who embrace this scrumptious fable, you’ll be treated to the first memorable feature film of 2014.-JL