Posted by amateurcinefile on June 11, 2014 in Cinema Journal

Newly minted parents Mac and Kelly Radner are cautiously excited about the more adult shift their lives are taking as they purchase their first home. Unfortunately their tranquil bliss is quickly shattered when a college fraternity purchases and moves into the house next door. After their friendly request to keep noise levels down falls on drunken, bass-deafened ears, Mac and Kelly make the mistake of calling the cops, starting an ever-escalating war between the two feuding houses.

I’ve said innumerable times that comedy is one of the most difficult genres to truly judge because it is SO taste specific. Comedies that I find hilarious, others may loathe with every inch of their soul. On the flip side, the list of classic, canonized comedies that I find to be disappointingly humorless is embarrassingly long. As for Neighbors, while I can safely proclaim that it won’t be winning any awards for groundbreaking humor, its unapologetic inanity makes it one of those humdrum comedies that offers harmless, escapist amusement. 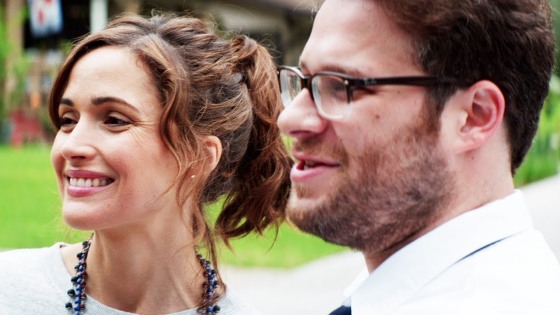 Over the last decade, Canadian clown prince Seth Rogen and his oafish chortle has taken over the mantle of top juvenile humorist from Adam Sandler, giving us a varying range of stoner, man-child type roles, highlighted by hit romantic comedy Knocked Up. In Neighbors, Rogen ventures only slightly outside his go-to persona, as his character Mac Radner is a thirty-something who is slowly coming to grips with the idea that his partying days are all but over now that he has a baby girl. As for Rose Byrne, who plays Rogen’s wife Kelly, this isn’t her first venture into the rude and crude world of 21st century comedy. Rose starred as Helen in the Kristen Wiig 2011 box office hit Bridesmaids and also showed off her uninhibited side playing the pop nympho Jackie Q opposite Russell Brand in Get Him To The Greek. In Neighbors, Byrne channels her inner naughty girl as she attempts to sabotage the brotherly bond of the fraternity house with her hoes-before-bros strategy. Together, despite the overwhelming disparity in levels of attraction, these two actually make a fairly entertaining couple.

Zac Efron has come a long way since his time as the Disney heartthrob in the High School Musical films. With charming good looks and chiseled physique (one that is unremorsefully compared to Rogen’s flabby breadbasket whenever possible) Efron perfectly embodies the pretty-boy allure of Teddy Sanders, the beloved president of the legendary Delta Psi Beta fraternity. Playing his right-hand man and Delta Vice President is Dave Franco, younger brother of James Franco. For better or worse, these two, along with Christopher Mintz-Plasse (McLovin in Superbad), embrace every stereotypical convention ever ascribed to the fraternity lifestyle to create the ultimate frat haven. 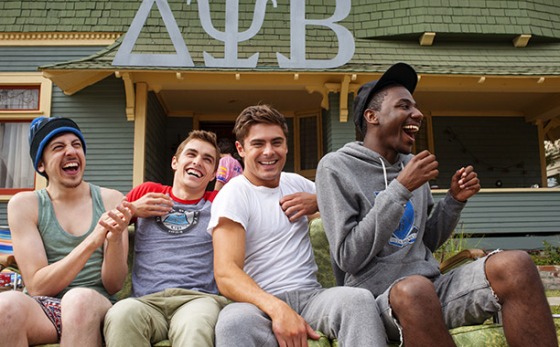 Fraternity humor is generally a testosterone infused barrage of dick and fart jokes, and gags of this nature are not always good-humored. Neighbors’ cringeworthy and/or disturbing moments include but are not limited to: any sex scene involving Seth Rogen (and there are surprisingly more than you’d ever anticipate would be agreed upon; I guess they really wanted to see Rose Byrne straddle and grind), Rogen and Efron drunkenly sword fighting with their streams while urinating together in an outdoor fountain, baby Stella gleefully playing with a rubber found on the front lawn after yet another all-night bacchanal, the milking of engorged mom breasts, the group fraternity activity of creating molds of their junk to create “toys” to sell as a house fundraiser, and Dave Franco’s unsettling talent for conjuring an instant erection simply through rousing mind control. If I said I staunchly avoided chuckling at any of these scenes I’d be lying to you, but I’d certainly understand if anyone else used the term repugnant to describe them. 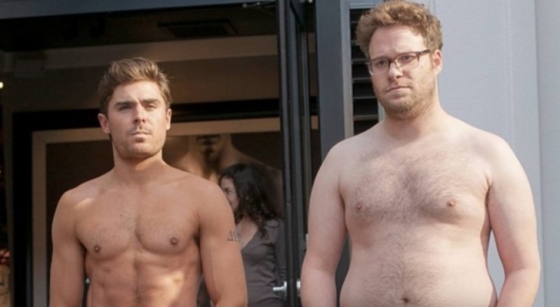 Neighbors is chock-full of sheepish smile and shake-your-head moments. You can decide whether that is a good or bad thing. Rogen and Efron play well together, and Dave Franco manages to actually steal a few scenes. Neighbors, in all its brainless glory, is destined to join the list of go-to drunken entertainment in fraternity houses across the nation for many years to come.-JL