A former Marine Lieutenant with an expertise in finance, Jack Ryan is recruited to become an agent for C.I.A., secretly infiltrating a Wall Street investment company to track suspicious transactions and expenditures. Upon discovering unusual bank activities with one of his company’s biggest Russian investors, Agent Ryan uncovers a clandestine conspiracy that not only puts his life jeopardy, but threatens the financial stability of entire U.S. economic system.

As the case is every year with a large majority of films released during the months of January and February, the quality of many of these movies just simply isn’t good enough to justify spending the ever-increasing theater prices to see them. As the month of June begins to wind down, the first run of 2014 movies are starting to hit DVD shelves and Redbox machines, allowing for movie fans to get caught up on films they originally ignored. One of this year’s crop of January released films, Jack Ryan: Shadow Recruit is the latest cinematic reincarnation of the popular Tom Clancy created literary character, this time played by Chris Pine, who joins Alec Baldwin, Harrison Ford, and Ben Affleck as actors tabbed to portray this famed, fictional C.I.A. analyst. Pine, who is best known for assuming the legendary role of Captain James Kirk in the recent franchise reboot of Star Trek, brings a quiet swagger and general appeal to this well-known character. A covert agent specializing in finance espionage, Pine captures the alarming confusion of a man suddenly thrust into a treacherous operation with real life-and-death consequences. At the same time, he capably displays the physicality one would expect from a former Marine with elite combat training.

After years of relative exile due to the prolonged backlash caused by the critical failures of Waterworld and The Postman, former megastar Kevin Costner has recently witnessed a career reprieve thanks in large part to his Golden Globe winning portrayal in the 2012 television mini-series, Hatfields & McCoys. Cast to play Ryan’s C.I.A. superior Thomas Harper, Costner’s imperturbable and aloof delivery typifies a man who always seems to know more than he reveals. Through the use of subtle facial expressions, Costner exudes the perverse amusement of his character as Harper influences and manipulates Ryan into the agent he needs him to be. 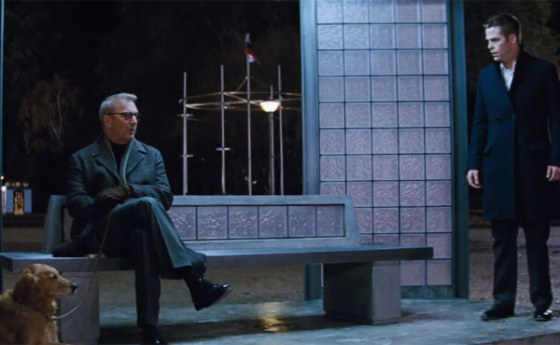 Famed UK thespian and five-time Oscar nominee Kenneth Branagh not only was cast as the film’s Russian antagonist, Viktor Cherevin, but also chosen to helm its creation, becoming Branagh’s thirteenth directorial effort. A man once thought to be the next Laurence Olivier, Branagh’s Cherevin in all his intimidating, vehemence, has the slightest undertone of satirical jest that attempts to convey the sly message of,  “now don’t take me too seriously.” 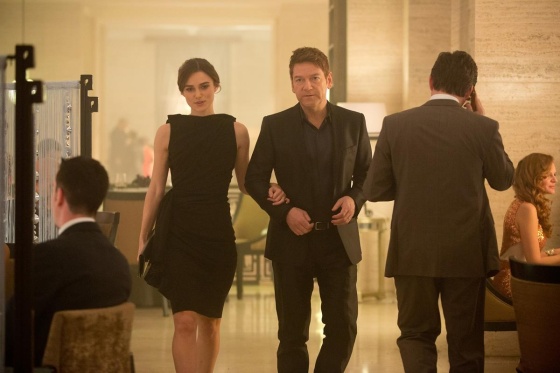 The film’s biggest failure involves the storyline surrounding Keira Knightley’s character Cathy Muller. Like so many action films of the past, Knightley gets relegated to the suspicious, vulnerable arm candy for Pine’s Ryan. Upon the discovery that Jack had been keeping his C.I.A. status a secret from her for over three years, her initial reaction was not to be upset by his deceit or of the imminent danger he has now put her in, but instead offering us the trite response of, “thank god, I thought you were having an affair”, all while staring at the giant handgun sitting next to her at the foot of the bed.

Amidst our recent strained relations with Russia and their egocentric leader, I must concede an unexpected, newfound enjoyment for the film’s exhausted Russian antagonist storyline. While at times the performance from Branagh the actor slips into a hackneyed cliche of your typical Russian villain, Branagh the director, appropriating from a plethora of spy films of the past, brings enough twists and turns to keep most viewers guessing to the end. Though offering no groundbreaking innovations to the spy sub-genre, Jack Ryan: Shadow Recruit is a tense, frenetic espionage thriller worth giving a second look now that it’s available on DVD and Blu-ray.-JL