"The only true currency in this bankrupt world is what you share with someone else when you're uncool."
7 Comments 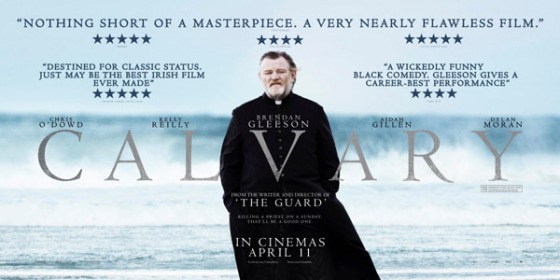 During Sunday confessionals, one of Father James’ parishioners calmly informs his confessor that he plans to kill the small-town Irish priest in one week’s time. Shaken but resolute, Father James makes a conscious effort to continue his daily duties. But as the week draws to an end, it becomes more clear that someone in his community is truly out to get him. Uncertain of the identity of this covert aggressor, James must come to terms with growing possibility of his own mortality while mending fences with his troubled daughter from his life before priesthood.

English born writer/director John Michael McDonagh, brother of director Martin McDonagh (In Bruges, Seven Psychopaths), made his own splash in 2011, teaming up with veteran Irish actor Brendan Gleeson to create the sleeper hit comedy, The Guard. Calvary, McDonagh’s sophomore effort, which also stars Gleeson, is a much bolder and more gripping achievement, astutely addressing ponderous topics, including the recent scandals in the Catholic church, with a deft touch that never comes across as preachy or judgmental. Blessed with a cast of British and Irish actors known more for their comedic gifts, McDonagh manages to incorporate a large dash of black humor that helps lighten some of the film’s more sobering moments. Like any great who-done-it mystery, McDonagh creates a slew of dead-end clues and characters, all adding their own uniquely twisted contribution to this masterstroke of a film. 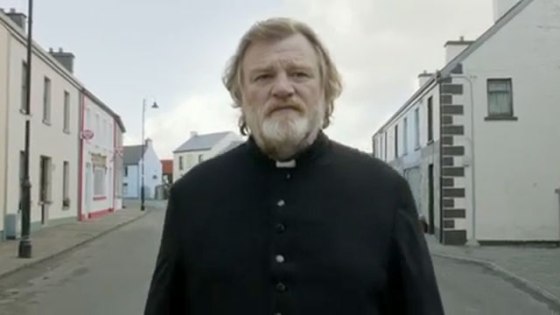 It is through the film’s powerful lead performance that this intrepid character study comes to life on screen. Born in Dublin, Ireland and originally a TV actor, Brendan Gleeson’s big break came when he was cast to play Hamish in the 1995 Best Picture winner, Braveheart. Since then, Gleeson, a three-time Golden Globe nominee, has become a favorite of many of today’s most talented filmmakers, including the likes of Martin Scorsese (Gangs of New York) and Steven Spielberg (A.I. Artificial Intelligence). In Calvary, Gleeson’s portrayal of Father James is truly something to behold. Fully embodying his character’s candid, tough-mindedness, Gleeson’s distinctly chiseled facial features expertly exude every inner emotion on his prominently-bearded face. In this career-defining role, Gleeson has proven with Calvary that he belongs among the names of today’s most gifted working actors. 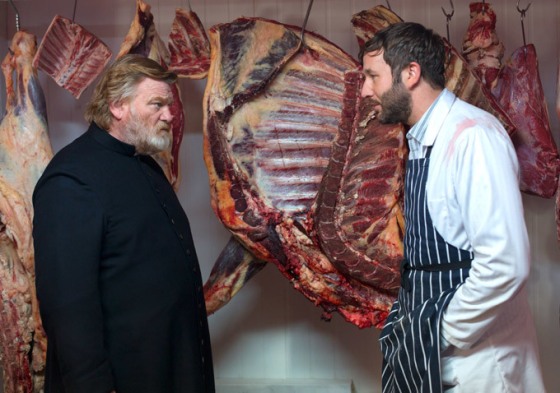 Calvary’s cast of supporting actors includes Chris O’Dowd, who delivers a truly memorable against-type portrayal of town butcher, Jack Brennan, and Domhnall Gleeson (About Time) who is was almost unrecognizable in his cameo as incarcerated cannibal, Freddie Joyce. However, the standout supporting performance comes from Kelly Reilly who plays Father James daughter, Fiona. Originally from Surrey, England, Reilly has found recent success, first working along side Robert Downey, Jr. and Jude Law in 2008 blockbuster Sherlock Holmes before wowing critics with her stirring portrayal in the 2012 Denzel Washington drama, Flight. In Calvary, Reilly plays Fiona, a damaged woman who is in desperate need of the love and support of her father, a man she feels abandoned her after the death of her mother. As Fiona, Reilly brings a truly touching and somber performance to a character, emoting a genuine vulnerability of a woman who is on the brink. 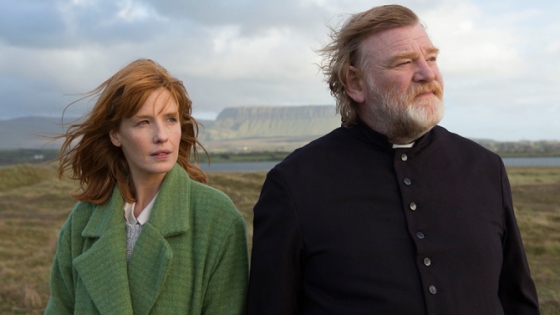 The look of Calvary is a somberly hypnotic feast for the eyes. Set among the coastal cliffs of Ireland, the sweeping vistas and seascapes add yet another level of wonderment to this already impressive film. Cinematographer Larry Smith, who is best known for his work with director Nicolas Winding Refn (Only God Forgives, Bronson), brings an expert eye to the forlorn appearance of Calvary. Utilizing Ireland’s dense cloud cover, the bleak and austere feel Smith captures plays perfectly with the film’s dark subject matter. 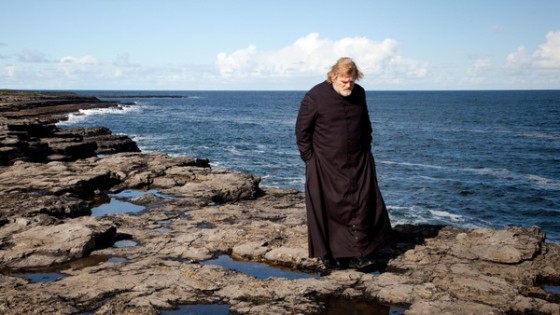 As the end credits began rolling, the entire theater sat in silence. Finally, when we began shuffling out, I remember thinking, that’s the type of cinema experience I hope for every time I sit down to watch a film. Building on the success of The Guard, McDonagh and Gleeson have teamed up yet again to create a darkly funny, thought-provoking masterwork. As for Gleeson, I have yet to see a more powerful performance in 2014. If he doesn’t receive an Academy Award nomination, it would be a mortal sin. Part who-done-it detective story, part black comedy, part modern western, part classic tragedy, Calvary is a stirring, heartrending, meditative reflection on faith and forgiveness that has already claimed its place on my end-of-year, Top 10 list.-JL